The Atleti family keeps growing. Every day there are more Atléticos around the World and the club has now reached 123,043 members, 57,718 of which are season ticket holders at the Wanda Metropolitano, and 65,325 are not. Atleti's social growth isn't slowing down and it's all thanks to our incredible fans. With this figure, we have surpassed the number with which we finished last season: 122,190.

The season tickets for the stadium's general capacity are now sold out, but you can still get your season ticket for the Neptuno Atlético de Madrid Premium, our VIP area.

On the other hand, the number of club members who aren't season ticket holders has increased significantly, since the passion for our colours doesn't stop growing. Our fans who wish to purchase their club member card can enjoy perks such as:

- Invitation to attend a match at the Wanda Metropolitano to choose between:

· A league match at the Wanda Metropolitano, except against Real Madrid and F.C. Barcelona, booked in advanced and meeting the deadlines set by the club and until stadium capacity per match is reached, limited to 1,000 tickets.

- Discounts or priority to purchase tickets for all Atleti matches played in the Wanda Metropolitano.

- 50 percent discount in the Atlético de Madrid Museum and guided tours of the stadium.

- 10 percent discount in the Club’s official stores (not cumulative to other offers and promotions).

- Free access to events and public training sessions, until capacity is reached. New

- Possibility of obtaining tickets or sign up for trips to attend Atlético de Madrid matches away from home.

For those Colchoneros who are not yet club members, we remind you that admission is open throughout the season. It's very easy to get your card: just click here to fill in your personal data and become part of the Atleti family! 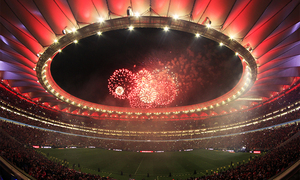 We are now over 123,000 Atléticos, take advantage of the opportunity and become a member of our family today!