The 2022/23 Atleti membership card tribute to the legend Paulo Futre. In this way, all Red & White members, both subscribers and non-subscribers, will have the figure of the great Portuguese player engraved on their Atleti ID, paying tribute to one of the greats of our history. If you are not yet a member, you can do it here! 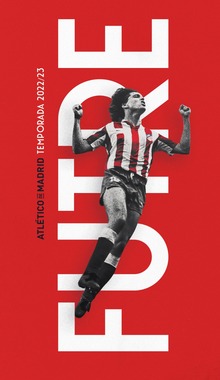 Our club continues to remember the legends who have worn the Red & White shirt and who have been fundamental pillars in the achievement of great milestones for the club. In the past seasons were José Eulogio Gárate, one of the most talented strikers and most loved by the Red & White family, Luis Aragonés, player and coach of our club that all generations of Atleti players recognise as one of their great idols, and Adelardo Rodríguez, the player with more games in the history of the club with a total of 553 matches.

Paulo Futre arrived at our club in 1987. His quality, goals and assists made the Portuguese star become one of the most desired and loved players by our fans. He scored a great goal at the Santiago Bernabéu in the final of the Copa del Rey against Real Madrid, which our team won by 0-2 and lifted a new cup title.

The Portuguese legend played for our club for seven seasons, divided into two periods between 1987/93 and 1997/98, and even wore the captain's armband. He played 215 games as a Red & White player, which means that he has a commemorative plaque at the Wanda Metropolitano that recognises his more than 100 games with our club. He won two Copa del Rey (1990/91 and 1991/92) with our club.

In this way, our history continues to be very present in our stadium, with continuous references to the players who forged it, such as the Walk of Legends, the changing room area, the player's access to the stadium, as well as the banners that surround it, the main avenue named after Luis Aragonés and also the Red & White membership card that serves as a tribute to our great legends. Next season it will be the figure of Futre that all Atleti members will proudly wear on their membership card.

If you are not yet a member, you can do it here!