Our 2021/22 fourth is now available. Like the other three we are wearing this season, it’s part of the tribute to the 75th anniversary of our current name – Club Atlético de Madrid. On Jan. 1, 1947, Club Atlético-Aviación changed its name to Club Atlético de Madrid. Our crest also evolved, as the wings that represented the Spanish aviation disappeared. To celebrate the 75th anniversary, we’re paying tribute to such an important moment in our club’s history through this season’s four kits. These are inspired by some unforgettable moments the Atlético fans have enjoyed during these 75 years.

The fourth kit is red, as it’s inspired by two historic moments in the club’s history: the first leg of the European Cup semi-final – which was played on April 10, 1974 against Celtic in Glasgow – and the 1985 Copa del Rey final that we won against Athletic Club. This jersey features the crest that coincided with the change of name from Atlético Aviación to Atlético de Madrid on Jan. 1, 1947, along with the slogan '75 años honrando tu nombre' ('75 years honoring your name') in the middle of the shirt.

Our team wore the kit for the first time in the Copa de Rey round of 16 match against Real Sociedad, which was played on Feb. 19 at the Reale Arena.

Our fans can purchase it via the Private Members’ Store. All the information about the fourth kit can be found here.

The fourth kit is available in a special commemorative box that includes a copy of the original document sent to clubs and institutions by Club Atlético-Aviación, officially communicating the change of name to Club Atlético de Madrid as of Jan. 1, 1947.

Moreover, as part of the celebrations, the ‘75 años honrando tu nombre' exhibition will be inaugurated at Territorio Atleti on Jan. 18. In it, you'll be able to look back at the most important moments of these past 75 years. Moments that the Atlético de Madrid family will never forget.

In addition, the club will invite to the match against Valencia on Jan. 22 the 34 members who have held their membership card uninterruptedly for the last 75 years and who have experienced first-hand this historic period, to thank them at the start of such a special year for the club. 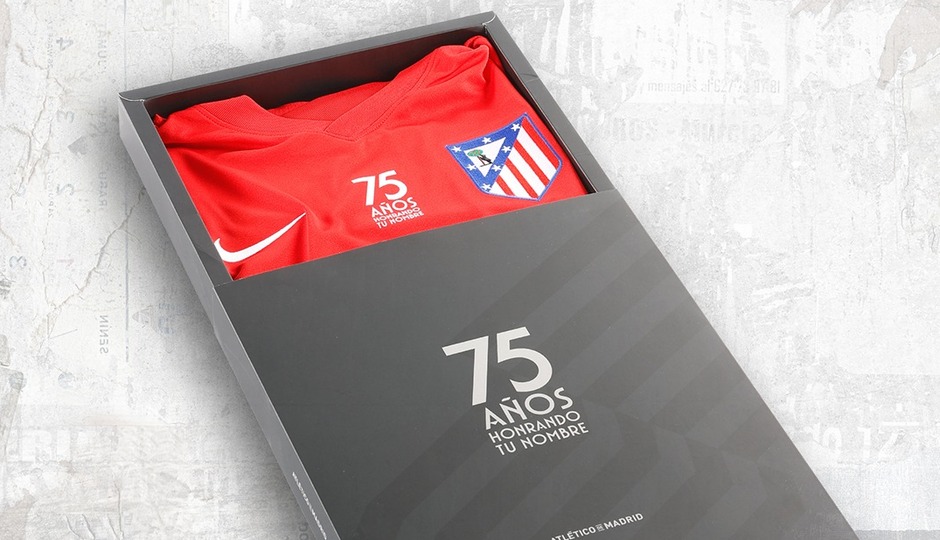