The Wanda Metropolitano has been awarded in the World Football Summit Industry Awards 2018 in the category of best venue. The prestigious annual football congress held in Madrid chose the home of all atléticos as the best sports venue. Our CEO Miguel Ángel Gil was in charge of receiving the award.

"First of all, I would like to thank the jury.” Miguel Ángel said. “A year ago we managed to inaugurate one of the best stadiums in Europe, combining comfort, safety and experience. And we managed to make a the home of our fans. We want to thank all those who have allowed us to be here and, above all, our fans who make the stadium full day after day.”

For the choice of our stadium as the best in 2018 the jury has taken into account issues such as fan experience (in the stadium or through new technologies), changes in infrastructure, technological advances (connectivity), match day operations, personalized attention, comfort, catering and security have been taken into account. Last season, the award went to another LaLiga stadium recently built, San Mamés.

The Wanda Metropolitano, a stadium at the level of the most important sports venues in the world has won this award ahead of two great stadiums such as CenturyLink Field and Mercedes-Benz Stadium, located respectively in the U.S. cities of Seattle and Atlanta. The first one is home to the Seattle Seahawks of the NFL and the Seattle Sounders FC of the MLS, while the second one is home to the Atlanta Falcons of the NFL and the Atlanta United F.C. of the MLS.

The ‘WFS Industry Awards’ are defined as a recognition and reward for "the work done by professionals in the football industry, who in their daily lives, beyond the 90 minutes of game, make this sport a real economic engine.”

The Wanda Metropolitano, inaugurated on September 16, 2017, is at the forefront of technology among stadiums around the world and offers an unforgettable experience and at the highest level to fans who gather at the same on the occasion of each game that our team plays as local.

Characteristics that have turned our home into a world reference in just one year of life, throughout which has hosted numerous events such as the friendly that measured Spain against Argentina last March, the final of the ‘Copa de SM el Rey’, or Bruno Mars’s and Iron Maiden’s concerts. Also, next June 1, 2019 it will host the final of the UEFA Champions League, thus becoming the epicenter of world football on that day. 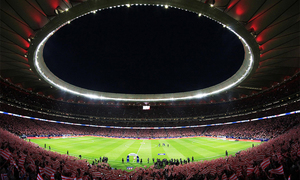