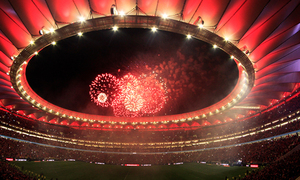 Our new stadium is located in the Madrid’s northeast area, next to the M-40, Adolfo Suárez Barajas Airport and IFEMA. The new stadium’s capacity roughly holds 68,000 spectators, with 96 percent of the seats covered by the roof. The club decided to prioritize spaciousness, comfort, and safety of the fans instead of having a larger capacity. In order to have easier access to the localities and reaffirm enjoyment in the most satisfactory way possible, the club has increased the distance between the rows as well as provided adequate access for disabled or reduced mobility fans.

The location of the stands and traffic management within the stadium, guarantees maximum security for the spectators. The arrangement of the stands, gives the fans an up-close and personal experience.

There are 1,000 parking spots inside the stadium and 3,000 in the exterior lot. On game days, parking is only available for those fans who have a parking pass.

The Wanda Metropolitano covers 88,150 square meters. In the perimeter of the stadium, there’s a Fan Zone in the Fondo Sur and another in the Fondo Norte.

Facing the west façade, you’ll find the Walk of Legends, a tribute to players who have played 100 or more official matches with our club.

In the southwest area of the stadium, a red and white flag pays homage to our fans. The flag is 338 square meters, the biggest in Spain. Nearby, fans will find a block text reading ‘Coraje y Corazón’, an iconic place to take photos.

The Wanda Metropolitano is a building with unique materials. The concrete is responsible not only for the building’s bearing structure but also its final shape. A light cover lies on the concrete, which crowns the building with a great homogenizing element.

The building has two chromatic elements: the light gray concrete and the white cover; except the red gutter that surrounds it.

The Wanda Metropolitano’s roof consists of a 46,500 square meters of fiberglass and polytetrafluoroethylene surface, placed at a maximum level of 57 meters on the pitch.

The structure is peculiar since it isn’t horizontal, but instead has different heights which give it a wave-like look, something very iconic and spectacular. The tensioned wires and Teflon membranes cover sits on the set of stands as if giving unity to the intervention from a large mantle.

The club has been surrounded by the best technology partners, to bring the experience of the Wanda Metropolitano to another level. The partnership with LG has as a common goal: innovation.

The Wanda Metropolitano has a 360º ribbon board, something unique in Spanish football stadiums. LED screens cover 530 square meters between the grada baja y media offer content to fans.

Thanks to digital signage and IPTV solutions, the club, through a wide variety of display options, can offer all kinds of exclusive content.

The stadium will not only offer Wi-Fi after a gradual implementation throughout the season, but thanks to club’s partnership with Cellnex, using 4G will not be a problem for fans in the Wanda Metropolitano. Cellular data is guaranteed for everyone.

The Wanda Metropolitano is the first stadium in the world to be 100 percent LED thanks to the club's agreement with Philips Lighting. The stadium’s spectacular roof uses Philips’ VayaFlood dynamic lighting, which displays 16 million colors.

The combination of this technology with Philips ColorKinetics dynamic lighting creates spectacular luminous displays. The use of this technology makes our new stadium one of the most innovative in the world, as well as a new icon in the Madrid skyline. The lighting can change depending on the event or moment.

Neptuno - Atlético de Madrid Premium is the name that encompasses all the VIP areas in the Wanda Metropolitano. A new experiential concept that is the result of the joint work of the club with the company CenterplateISG, a joint venture between Centerplate and International Stadia Group (ISG), two global references in the management and operation of sports venues.

The VIP experience in the Wanda Metropolitano is one of the best in the world. The spaciousness of the suites, quality of the services, accessibility through elevators and the parking available within the stadium itself guarantee a different way of experiencing football.

The VIP area covers more than 11,000 square meters and offer three different options (Suites, Boxes and VIP Locations). No matter the option, the seats are open air so you can enjoy a typical Atlético match day experience.